Scandinavian traditions and celebrations you don’t want to miss

Scandinavian traditions and celebrations you don’t want to miss

What do you know about Scandinavian traditions and celebrations? They are many, and we are pretty sure that you’re going to be more curious once you’ve found out about them. Sweden, Norway, and Denmark share cultural and historical endowments.The Scandinavian countries have a unique heritage and repeatedly categorize among the world’s happiest countries¹. This blog post will take a closer look at the Scandinavian traditions and celebrations. They might differ slightly from other countries. You don’t want to miss them!

Shrove Tuesday occurs the 7th Tuesday before Easter and is celebrated in all three of the Scandinavian countries. The celebration is about eating a sweet bread roll called semla in Swedish, and fastelavnsbolle in Norwegian and Danish. Swedes eat semla together with almond paste and whipped cream, while Norwegians and Danes eat their fastelavnsbolle with jam and vanilla cream.

The celebration of Shrove Tuesday comes from Lent’s Christian holiday when one introduces oneself to 40 days of fasting before Easter. During Lent, one should live spartan, not eat meat, or revel in any other way, so it was essential to eat properly on Shrove Tuesday. The tradition of eating bread rolls on Lent started during the Middle Ages and is still very popular² ³.

Waffle day, Våffeldagen, is a day celebrated in all the Scandinavian countries. This day occurs on Mary’s Annunciation Day, Maria Bebådelsedagen in Swedish also called Spring Lady’s Day, vårfrudagen. The waffle day thus takes place nine months before Jesus’ birth. In Sweden, this day is believed to be the official waffle day because Spring Lady’s Day sounds like the word waffle day in Swedish, and someone perceived that it was this day they were talking about.

There is no direct link between Christianity and waffles other than that the waffle iron is similar in design and construction to the wafer iron. Also, the first waffles were baked in the monasteries of southern Europe before the year 1000. The waffles are considered to have come to Sweden in the 16th century. It was at the beginning of the 20th century that waffles’ popularity started to increase⁴.

Today Swedes, Norwegians, and Danes celebrate this day with crispy waffles together with toppings such as whipped cream, ice cream, fresh berries, jam, or marmalade.

Walpurgis night, valborg in Swedish, is an old tradition in Sweden. From the beginning, it was all about scaring away witches and bad spirits through lighting bonfires, majbrasor. The purpose was for protection to scare off evil forces by making a lot of sounds. Nowadays, the celebration is more about celebrating that the winter is over and that spring has finally arrived⁵.

Every 17 May, Norway commemorates the signing of the constitution on that date in 1814. It is a massive day for Norwegians and a party for everyone, especially children. Many men and women know this day as an opportunity to show off their “bunad,” which is Norway’s traditional costume. They can vary a lot by how they look, depending on where the owner’s ancestries are in Norway.

Before celebrating the day on the streets, many Norwegians gather for an excellent breakfast together with friends and neighbors. After breakfast, children’s parades take place across the country while thousands of people are waving flags. In the capital, the parade is even greeted by the royal family from the Royal Palace balcony⁶. 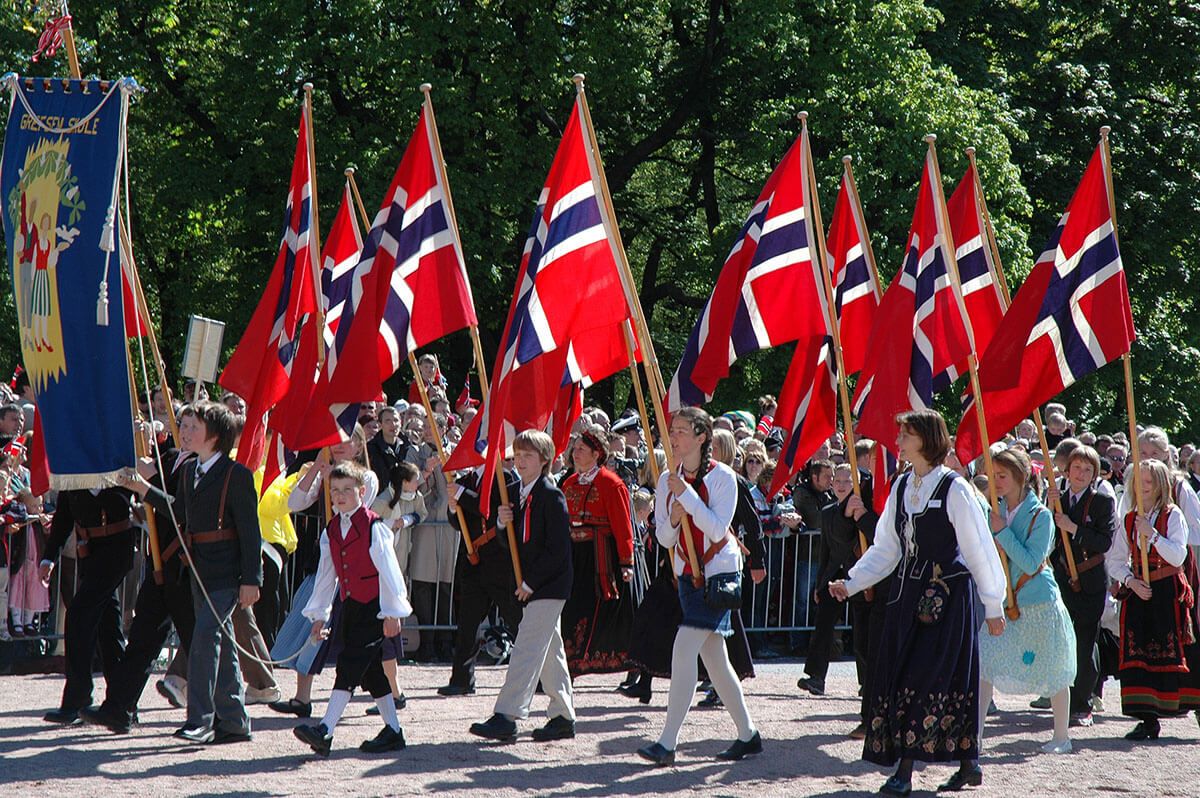 Denmark’s Constitution Day, Grundlovsdag, commemorates the anniversary of the signing of the Danish constitution of 1849 by Frederik the VII, which established Denmark as a constitutional monarchy. This day is not a national public holiday, yet government offices, banks, educational establishments, and shops are closed by law. Danes celebrate Constitution Day by enjoying the summer weather and listening to political speeches on the government’s state⁷.

Sweden’s national day has been celebrated since 1893 to commemorate Gustav Vasa’s election as king in 1523 and the 1809 form of government. In 1983, it officially became Sweden’s national day, and since 2005, it’s an official holiday. After that day, the celebrations have been more popular.

Many other countries have a more significant celebration of their National or Constitution day, often related to their independence. There is no strong historical connection to celebrating the country’s National day when it comes to Sweden.

The largest celebration of Sweden’s national day takes place at Skansen, an open-air museum and zoo in Stockholm. The royal family comes and participates in the celebration that is broadcast live on TV. At Skansen, the people are waving flags, and there are music and speeches⁸ ⁹.

Midsummer, midsommar in Swedish, is a mix between old and new traditions. In Sweden, midsummer is the main party of the summer. One crucial part of the celebration is that everyone picks out flowers, making head crowns and wreaths for the maypole, midsommarstången. Later the maypole is raised, and traditional ring-dances follow. Another part of the tradition is to pick seven flowers to put under the pillow during the night that follows. Maybe you wonder why? The reason is that you would dream about the person you will marry one day if you do this¹⁰ ¹¹.

Saint John’s Eve, Sankt Hans Aften in Norwegian and Danish, is a tradition in Norway and Denmark and reminds of Swedish midsummer. The celebrations start in the evening, at sunset on 23 June, the day before the Feast Day of Saint John the Baptiste. This day is celebrated together with bonfires, singing, family reunions and is an occasion for drinking and eating¹³ ¹⁴.

A crayfish party is a traditional summertime eating and drinking celebration that initially comes from Sweden. A crayfish party, kräftskiva in Swedish, is generally held during August, a tradition that began because the crayfish harvest in Sweden was legally limited to the late summer for most of the 20th century. Nowadays, the date in early August has no legal significance. Significant party decorations and accessories are novelty hats, tablecloths, lanterns, and bibs.

In Norway, the crayfish fishing season also begins in August. The Norwegian name for the crayfish party is krepselag. In Denmark, this tradition is not as expected¹⁵ ¹⁶.

On October 4th, the Cinnamon Roll Day, Kanelbullens dag, is celebrated in Sweden. The celebration’s purpose is to increase attention to Swedish baking traditions, focusing mainly on cinnamon buns. Cinnamon Roll Day was decided to be celebrated on this date, at the beginning of October, because the Swedish Home Baking Council did not want the day to compete with other country food traditions. If you’ve never tried cinnamon rolls before, you should. They’re delicious¹⁷.

Sweden, Norway, and Denmark celebrate some Scandinavian traditions together, and one of them is Saint Lucy’s Day. In Swedish, the practice is called Lucia, in Norway, it’s called Lussinatten, and in Denmark, the name is Luciadag. Saint Lucy has an enduring role as the carrier of light in the dark Scandinavian winters, and in the church, people dress in white gowns and sing songs while holding candles.

In Sweden and Norway, Saint Lucy’s Day is mostly a secular event. In Denmark, the tradition differs somewhat. The church celebration has always been strongly centered on Christianity, and it is a yearly local event in most churches in conjunction with Christmas. Still, it does not have much impact anywhere else in Danish society¹⁸.

The Christmas celebrations are similar in Sweden, Norway, and Denmark. In Scandinavia, Christmas Eve is usually deemed much more important than Christmas day. There’s a lot of evidence that this fondness of Christmas Eve comes from Scandinavia’s Viking heritage. According to the Vikings, a new day starts when the sun goes down on the day before. This idea could be the reason why many Scandinavians start the festivities early on Christmas Eve. Christmas Eve is when most Swedish, Norwegian, and Danish families open the presents. Visiting the church on Christmas Eve is also an essential part of some Swedes’ tradition.

For Christmas, the Swedes prepare a buffet with ham, fish, pork, lots of sweets, and much more. In Norway, they eat dry-cured lamb ribs or codfish cured in lye. Typical treats in Denmark include stuffed goose or duck with sweet potatoes, cranberry sauce, red cabbage, and rice puddings. All across Scandinavia, the drink glögg, in Swedish, and gløgg, in Norwegian and Danish, is famous around Christmas. This hot drink is a mulled wine¹⁹.

As you surely can tell by now, Swedes, Norwegians, and Danes like traditions. They celebrate all kinds of days, both historically important days and more modern ones.

Are you curious and would like to experience some of the Scandinavian traditions and celebrations yourself? Are you at the same time interested in a medical career in Scandinavia? If the answer is yes, we might have the perfect solution for you. Please, contact us for more information.