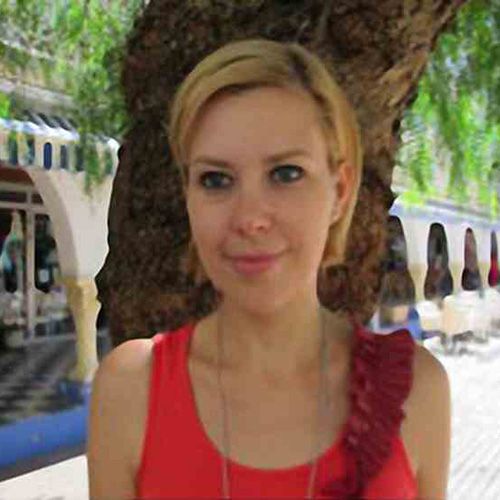 AGNES studied in Calafell and brought with her her twins, who at the time were two years old. Her husband, who is a surgeon, was working in England at the time, but now he has also found a job in Sweden and the family has been reunited in Jönköping. Agnes began the language training in September 2012 and started working in Sweden in February 2013.

Abba has been among her idols since she was a child and this made her dream of one day moving to Sweden. When, later on, the situation for doctors in Hungary kept getting worse, she and her husband began thinking about moving to a different country. A couple of friends of the family found jobs in Sweden through MediCarrera and they had a lot of positive things to tell about their experience. This made Agnes and her husband choose to also take the step and apply through the same company.

They sent their CVs to MediCarrera and after a couple of months, they were called to an interview in Budapest, where they received thorough information about the existing possi­bilities. They chose to go on with the process, although at that point only Agnes could be offered a job.

The next step in the process was to travel to Sweden for an interview trip. Agnes thought it was well organised and was able to meet her colleagues to be, see the workplace, hear about how the work was organised and how she should complete her training in order to be able to work as a general practitioner in Sweden. She was able to get to know the town, Jönköping, and see what the homes and schools looked like, what kind of leisure activities you could practice there and generally get an idea of how it would be to live and work there.

“MediCarrera did a very good job in helping us with everything surrounding the move, especially with finding a place to live.”

Agnes is satisfied with MediCarrera’s way of working and the help they have received the whole time, from the start of the application process to the arrival in Sweden. “MediCarrera did a very good job in helping us with everything surrounding the move, especially with finding a place to live. For example, we didn’t know about the queue system that exists in Sweden for getting an apartment, so without their help, it would have been very hard for us”, Agnes tells us.

The day of the move, they had an unpleasant surprise since the trans­portation company had made a mistake and sent a moving truck that was too small. But Agnes was able to call MediCarrera’s staff, that immediately organised for a new truck to come and everything worked out.

The training in Calafell was an intensive experience for Agnes, who came to Spain alone with two children. “The teacher we had was the best teacher I’ve had in my life! I didn’t think it would be possible to learn Swedish in such a short time, but then, surprisingly, after four months we could speak fluently. It was simply fantastic! When I had my first patients in Sweden, they hardly believed me when I told them that I had only been in Sweden one month and that I’d started the language studies six months earlier.”

During the language training, her children attended MediCarrera’s day-care between 8am and 4pm, but it was obviously quite a challenge to handle the intensive course being alone with two small children. Halfway through the course, she chose to leave her children with her mother in Hungary in order to be able to focus completely on her studies.

The introduction at the workplace in Jönköping in February went well and she felt very welcome. The introduction period lasted about ten weeks and after that she started attending two or three patients each day. Her workload was increased gradually during a couple of months, at a speed she felt comfortable with. The whole time she had someone she could ask if she needed help, something that made her feel calm. “There are big differences between Hungary and Sweden when it comes to treatment methods and you have to ask a lot and practice a lot. It doesn’t come easy, but you have to be patient,” Agnes says.

She tells us that she gets a much more positive reaction here in Sweden when she asks someone for advice than what she received in Hungary. “In general, the work­place functions better in Sweden than in Hungary. Here you have more doctors and nurses working in each district and you work with a good team feeling and an attitude of sticking up for one other. Here, the patients are also positive to the doctor collab­orating with other experts and asking them for advice. In Hungary this is practically seen as a sign of incompetence.”

Working as a general practitioner in Sweden adds prestige to your CV all over the world, since the education is more extensive and Sweden is in the forefront both scienti­fically and organisa­tionally. About a month later, her husband started work in Sweden, at the same hospital as Agnes. Many things are still new to him, but the family has started to adapt to their new daily life and they have made a lot of friends.

For Agnes, the best part of the move has been the fulfilment of one of her childhood dreams. She also thinks that the move has been very good for her children. Sweden is a very child friendly country and the day-care is well functioning and peda­gogically oriented. She thinks that her children have become much more open since they arrived in Sweden and it’s clear that they are thriving.

The most difficult part has been leaving their parents and friends in their home country. In certain situations it’s also still difficult to achieve total control of the language, particularly when she has to explain complicated illnesses to the patients and wants to limit the use of medical terms and expression. “But now we find ourselves at home and the whole family is thriving here. We are happy we made the decision of coming to Sweden”, Agnes concludes.